The seventh annual 2018 Rugbytown 7s will be held August 26-28 at Infinity Park in Glendale, Colorado. Tickets are available now for the event.

For the seventh year running, Glendale’s RugbyTown 7s tournament will animate top rugby competition from around the planet. Domestic and international clubs bring their best talent to RugbyTown USA in August, alongside representative teams from all five branches of the US Military, as well as the British Army and Royal Armoured Corps. Participating teams come from the world over, including representatives from the U.S., Canada, Europe, and the Caribbean. 20 elite teams will compete for a $10,000 winner-take-all purse. Hosted at Glendale, Colorado’s Infinity Park, the tournament takes place August 24-26.

The popularity of RugbyTown’s signature event comes as no surprise, especially as the professional team, the Glendale Raptors, celebrate their explosive debut in Major League Rugby during the inaugural season in 2018. Glendale’s rugby programming, which includes amateur club play, a Women’s Premier League team, and Youth Rugby, illustrates the city’s commitment to providing players and coaches a pathway to professional play, and to growing the sport in the United States.

With tournament pool play Friday, knockout play on Saturday, and semi‐finals and championship matches on Sunday, the late-summer weekend will see rugby heroes born. As in years past, Glendale’s annual Bruises and Brews beer festival, hosted by Infinity Park, will only add to the festival atmosphere. Over two days for the first time in 2018, Bruises and Brews will feature more than twenty unique local breweries, distilleries, and cider makers each day. Festival tickets include admission to the RugbyTown 7s tournament and a commemorative tasting mug. A 20% discount is available for Military, Government, and First Responders. Beer and rugby – better together!

This August, the RugbyTown Sevens Tournament will once again show that the world plays rugby in Glendale. 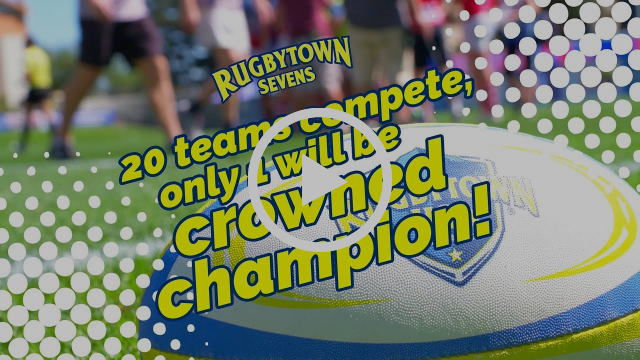 A returning challenger for the RugbyTown Tournament, the Bermuda squad is coached by Fijian Rugby Sevens legend Waisale Serevi. Though the team has taken a break from RugbyTown competition, don’t let the time off fool anyone: Bermuda will be a challenger for the 2018 RugbyTown 7s Championship.

The Army 7s team was created in a pub. Due to a recruiting shortfall in the late 1990’s the British Army recruited a large number of Fijians, creating a 7s pedigree within the British Army. Many of the Soldiers and Officers in the British Army have gone on to win International 7s Caps for England and Scotland. The team will no doubt bring top-level competition to RugbyTown.

Appearing for the third time at Rugbytown 7s, and working to develop the Caribbean rugby participation base, the team was founded in 1971 and became an associated Union with World Rugby in 1998. With scores of players on the men’s XV and XII teams, Cayman Islands is driven to develop the sport at the grassroots level. Their Get Into Rugby program has nearly 2,000 youth participants.
Collegiate All Americans (USA)

Founded in 2008 by Michael “Whitey” Nelson and Mark Perle as a premier touring side in the USA, the team has won five Aspen Ruggerfest Championships in its decade of existence. Aside from the alpine Colorado competition, the Misfits have competed annually in the Scottsdale Wild West Fest, putting on dominating performances year after year. The Misfits also compete in the Las Vegas Invitational and the Cowpie Classic in Steamboat Springs, Colorado. New to RugbyTown7s, the Misfits will look to further their rugby pedigree in 2018.

The Denver Rugby 7s Selects were branded by USA Rugby in early 2014 as a city-based regional Elite Select team. With a culturally diverse staff and player pool that includes both Olympian competitors and ruggers from the US National 7s team, the Denver Selects are not a squad to discount. Two-time defending RugbyTown 7s Champions (2015 and 2016), as well as runners up for 2014, the Colorado team will be shooting for top honors again in August.

Establishing themselves quickly, the Lomaiviti squad has reached the semifinals of the Hawaii International 7s Tournament, as well as the quarterfinals at the LVI Men’s Aces 7s. With a home base in Santa Rosa, California, the team is looking to improve upon its impressive resume at RugbyTown7s.

Entering the RugbyTown 7s Tournament for the first time, the Barbarians are a brand new team. Looking to prove themselves in their first year of club play, the Toronto, Canada-based team hopes to make a splash in August. A player-driven, performance-based invitational Rugby 7s touring program, the Barbarians are ready to prove themselves on American rugby’s home stage at Infinity Park.

A newly registered 7s Club team in 2018, the Sacramento Eagles want to put a stamp on their first year at RugbyTown7s. Previously reaching quarter and semifinal-level play at Fiji Rugby Day competition, as well as the Utah Pioneer International 7s and Plate Quarters final stages, the team has a rich history prior to its USA Rugby registration. Under the tutelage of Head Coach and Manager Paula Biutu, the team is looking for further the future for young rugby players through exposure at events like RugbyTown 7s.

As one might suspect, the history of SCRFU is aligned with Hollywood! The first President of SCRFU in fact, was the famous horror movie star Boris Karloff, an ex-partite from good old England. Legend has it that the first fund raising efforts in 1936 were accomplished by working with the Hollywood friends of Boris – unfortunately the team’s Treasurer absconded with the funds, but the incident apparently led to the incorporation of SCRFU in 1937 with Boris as President. With this crazy beginning, the team became the wonder power that they are today – though with less famous administrators. The Griffins are returning to RugbyTown7s with the hope of making more history in 2018.

Tiger Rugby has grown from a local touring side, to an internationally respected rugby brand, crossing the globe seeking new places to compete. Over the last seven years alone the team has competed at the Nelson Mandela Bay 7s in South Africa, Mar Del Plata Argentina, Fiji, Bora Bora Tahiti, Safari 7s Kenya, Shanghai 7s China, Melrose 7s Scotland, Cancun 7s Mexico and Central Coast 7s in Australia. International representative players from USA, New Zealand, Kenya, and England have come through the squad’s ranks. Dozens of USA Eagles have gone through the program, as have a number of Olympian competitors. An international side, Tiger Base Camp is located in Roswell, NM, USA.

With members stationed across the world, the Coast Guard squad consists of many different service communities. Competing as their own side since 1983, the team focuses on executing rugby fundamentals consistently – especially as the team has limited time to compete together as a team each year. Comprised of players with a vast range of military experience, the Coast Guard team has representatives from every community within its mission service set. The team hopes to make a splash at the 2018 RugbyTown7s Tournament.

Comprised of Airmen from all across the globe representing Air Power on the pitch. The Airmen represent the Air Force from all over the world, including those stationed in Japan, Korea, Europe, and all over the U.S. They earned a second-place finish in the Armed Forces Championships last year and pride themselves on aggressive, go-forward play and are focused on team play. Their blue and black kit represent the colors of the AF, and their logo represents Sevens and the concept of flight. In addition to the 7s team, the Air Force rugby family includes a 15s team and a women’s team, the first women’s rugby team in the U.S. armed forces.

All Army 7s was established in 2012 and competed in the initial Glendale RugbyTown 7s Invitational in 2012. Since 2012 Army has won 5 Armed Forces Championships, placed twice in the quarter-finals at Glendale, and has numerous current and former US National Team players, several of whom are members of the Army-World Class Athlete Program (A-WCA). All Army assembles once a year for a 10 day period. All players are Active Duty, Army National Guard, or Army Reserves. The Army returns to Infinity Park as four-time defending champions of the Armed Forces Championship. Last year, the Army defeated Air Force 55-5. “The formula started [six]years ago,” Army Head Coach Col. Mark Drown said last year in an interview with Armed Forces Sports. “For us to be successful, we needed to find a network of young players, some veteran players and establishing a work ethic and code of conduct among our rugby community.”

The US Marines were the last non-Army team to win the US Armed Forces Championship, in 2012. On the heels of announcing their partnership with USA Rugby in early 2018, the elite American fighting force will put its recruits to the test not just on the world’s battlefields, but also on the rugby pitch. Embodying the motto “Semper Fidelis,” the Marines 7s side will take the pitch at Infinity Park prepared to put everything on the line for a victory.

The USA Falcons are one of two national representative rugby union teams from the United States. Founded in 2005, the team will demonstrate in August that American rugby is not only an emerging force on the international sporting scene, but that it is a thriving, vibrant community.

A late entry to the 2018 RugbyTown 7s Tournament, Washington Athletic Club (WAC) has been a part of the Seattle community for nearly 90 years. Through modest beginnings, the organization has evolved into one of the premier city athletic clubs in the country. Formed in 2017, the WAC Rugby 7s side went undefeated in their first ever tournament, and promise to bring high-level competition to RugbyTown.

Year after year, hundreds of rugby teams from across the world make RugbyTown USA their destination. Celebrating more than a decade as the epicenter of American rugby, the vision of Glendale, Colorado city leaders has earned the title of RugbyTown USA. Infinity Park, the first rugby-specific stadium in the country, is more than a boon for Colorado’s rugby fans, players, and coaches: it’s a leader for the sport’s national and international community.

Critical to maintaining its status as America’s rugby capital is the city’s dedication to developing the sport at the youth level. Glendale Youth Rugby offers a tangible pathway to embrace the sport from kindergarten to the professional level. RugbyTown USA is a beacon for the sport, a haven where the top domestic talent can develop. With second-to-none facilities, staff, coaches, and players, Glendale’s Infinity Park remains the pinnacle of American rugby.