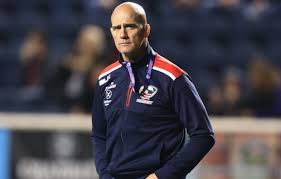 Hired by USA Rugby in January 2016, Mitchell had plans to develop a strong team culture within the Eagle player pool and provide the athletes with the confidence and tactics necessary to perform at the international test level. From coaching a young team in the inaugural Americas Rugby Championship last winter to the National Team’s first major championship trophy in the same competition a year later, the 53-year-old former All Black has produced an experienced summer squad absent of debut caps.

“I was brought in by previous USA Rugby CEO Nigel Melville for my expertise on creating a winning approach to the modern game,” Mitchell said. “He felt that the development of the game within the USA would benefit tremendously if the men’s XVs side was highly competitive. This is what I have achieved.

“I would like to thank USA Rugby, World Rugby, and all the players and staff that I have been associated with on my watch. It has been a huge privilege to play a major part in USA Eagles history and be associated with the development of young American men living a dream playing and coaching for their country and developing a sustainable High Performance model that someone else can now lead and evolve.”

Mitchell’s U.S. teams in four assemblies thus far have featured the rise of a growing base of domestic talent as well as sporadic appearances from players playing professionally abroad, accumulating a win-loss record of 7-5 in 12 international tests.

“It’s a nice feeling to know that the current USA Eagles squad is now not so dependent upon just overseas players and that our domestic players are taking on the challenge and performing above the required standards set and creating healthy competition amongst the athletes,” Mitchell said.

The 30-Eagle squad assembling in New Jersey next week is preparing for an important pair of Rugby World Cup 2019 Qualifier matches against Canada. The aggregate winner will secure the Americas 1 qualification spot at the tournament in Japan, a feat that has not been achieved by the Eagles in seven quadrennials. Kicking off the summer with international tests against No. 4 Ireland and No. 12 Georgia, the Eagles will still have a focused Mitchell at the helm.

“I am a professional and I expect others around me to respect this while in this transition. My eyes will be on the plan for every minute as we cannot waste one of them to ensure we present ourselves the opportunity of making a lot of people happy.”